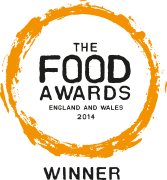 We are thrilled to announce that, after being nominated for the best restaurant in the south of England at The Food Awards England and Wales 2014, we were presented with the award at Monday evening’s ceremony at the Mecure Piccadilly, Manchester.

This award recognises the huge effort from everyone at The Oxford Kitchen since we opened at the beginning of the year, and we would like to thank all of our customers for their ongoing support.

We use Cookies to help us provide the best browsing experience for our visitors. By using our website, you agree to our use of Cookies. Learn More »